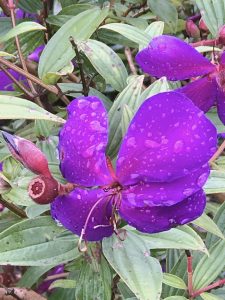 The miracle of the “Swallows of Capistrano” takes place each year at Mission San Juan Capistrano in California. The birds migrate 6,000 miles from Argentina to San Juan Capistrano in large numbers. The return of the Swallows has been celebrated since the early 1930s. In like manner, I too have experienced a personal migration of sorts for the past nine years, except that my “migration” is 10,000+ miles from Albuquerque to Vietnam. It seems that it has become a normal part of my routine.

I’m not sure how many stops the Swallows make between Argentina and the Capistrano Mission but my journey included overnight stays in Dallas, Singapore, and Saigon. This body of mine is made for comfort, not speed! The flight from Dallas to Hong Kong is about 16 hours and the flight from Hong Kong to Singapore took about 4 hours. The 14 hour time difference really does a number on the body and so the stopovers help to compensate for some of the disorientation and confusion. And if that’s not true, it ought to be!

I arrived at Thanh Son International Airport, Saigon on Saturday to the warm embrace of 90+ heat and humidity to match. Saigon is a bustling metropolis of about 8.5 million people of which I think at least half of whom are on their motorbikes at any given time of the day or night. That percentage rises dramatically during the Lunar New Year (Tet) which will occur in the middle of February this year. I stayed at a nearby hotel because I had an early flight the next day (Sunday) to DaLat and I did not want to burden the Friars with a quick “pickup and delivery.”

The temperature contrast between Saigon and DaLat is like comparing a hot steamy shower to a calm and gentle spring time shower. Day time temperatures are in the mid 70s and at night the temperature drops into the 60s. The city is located about 130 miles northwest of Saigon and it is at a 5,000 foot elevation and it has a population of about 200,000. The area is considered to be the “floral basket” of Vietnam. Flowers and orchids shout out everywhere and it is home to many commercial flower farms.

DaLat is where the Vietnamese Franciscan Province has its Novitiate and it is where I am teaching conversational English to the twenty-two Novices and ten Aspirants. There is only one OFM Franciscan Province in Vietnam and it is blessed with scads of vocations. Being here with the young novices is food for my Franciscan spirit. It is encouraging to know that the Order is prospering in this part of the world. I pray that this Franciscan Spirit will once again be re-ignited in our USA.

When I arrived at the Novitiate, I presented the Guardian with a 5 pound Hershey’s chocolate bar that I schlepped in my suitcase, all the way from Albuquerque. Our “ever vigilant” TSA officers saw fit to open the box to make sure that I was not smuggling explosive chocolates and I am happy to report that they found no fault with it. The gift was accepted with joyful smiles and audible “Oohs and Ahhs” by the holy novices. 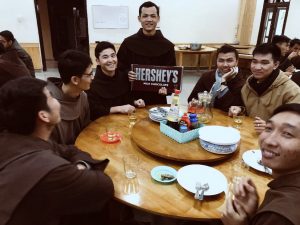 My daily class schedule is quite leisurely at the moment but it will gradually start to fill up as I begin tutoring the 10 Aspirants. Right now I am only tutoring two novices each day (Mon-Sat) for one hour sessions. The Aspirants are college students with a Franciscan inclination who live together in a separate house in DaLat while they are completing their college studies or technical school certificates. They pretty much take care of themselves with only minimal supervision by the Friars. They have put together a daily schedule of Prayer times and Mass attendance at the neighboring diocesan parish and they have worked out a house routine so that everyone helps with cooking, cleaning, and maintenance. I marvel at the religious commitment that these young men have.

The novices are already making remote preparations for the upcoming Tet holiday. The other day they dispatched two pigs that will be used for all of the special foods that will be prepared for the three-day holiday. And I prepared a batch of New Mexico Red Chile for the lads and I’m happy to report that it was a culinary success. Some of the novices ate it as if it was soup. I brought the red chili powder with me from New Mexico and I purchased the ground beef, flour, and garlic at a local super store called, “Big C.” It is like our Walmart, Target, and K-mart on steroids. The store has just about anything you might want or desire, if you are willing to pay the price. Such stores are showing up in most Vietnamese cities these days as the economic standards of the country continue to improve. These places are frequented by the Vietnamese middle class but the less fortunate still prefers to go to the outdoor markets.

I am anxious to begin my tutoring in full force with both the Aspirants and Novices. All of them have studied English in the Vietnamese schools, beginning in the primary grades. The problem is that they don’t get much opportunity to use the language because they are self-conscious about speaking correctly. I think that my presence acts as a catalyst for them. If they wish to speak with me, they must use what English knowledge they already have.

Peace and All Good! – Bruce