This past week was filled with multiple events the first of which was my 71st birthday on February 6. It is certainly a sobering thought to realize that so many years have passed by. I was so very grateful for the opportunity to be able to celebrate this momentous occasion in Vietnam. I was surrounded by the smiling faces of the young novices, all wishing blessings and graces upon me. I can’t think of a better way to ease into my 70s. I have been told that now that I have reached this plateau, I can now be called “Grandfather.” I’m not sure if I should feel complimented or disconcerted by that title. Be that as it may, it was a most joyous event 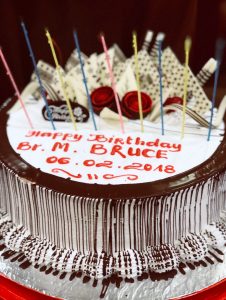 On the very next day, I traveled to Saigon to welcome Jack, our Provincial, to Vietnam. He came for a week long visit after being in Manila to spend time with our Hilaire Valiquette, who is teaching at the Franciscan seminary there. I have to say that I was most grateful for the relatively cool weather in Saigon while we were there. Usually the temperatures hover in the high 80s with lots of humidity but we were spared from that discomfort and instead enjoyed more moderate climes in the upper 70s. Saigon is a bustling city of 9 million residents and it seemed that at least half of them were cruising on their motor bikes or in their cars while we were there. Of course, Tet is just around the corner (February 15-16-17) and so that added to the frenzied activity in the streets.

Thursday was truly blessed with a visit to the Cloistered Dominican Monastery of Our Lady of the Holy Spirit in Dong Nai, which is adjoining to Saigon. There are currently twenty nuns in residence and the temporary monastery is about ready to burst. Relief is on the way as approval has been given by the government allowing the nuns to begin the construction of their permanent monastery. I have no doubt that the new building will quickly fill up with new vocations. 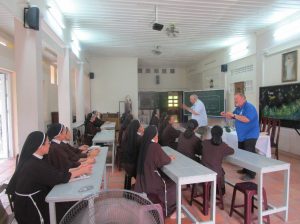 The Poor Clares were next on our agenda and we enjoyed a joyous visit which included a question and answer session as well as a Sing Along. I taught the nuns a simple tune entitled, “Rejoice in the Lord.” We were even able to sing it in two parts. I should mention that both the Cloistered Dominicans and the Poor Clares made requests for me to offer English classes. I wish that I could accommodate them but DaLat is 130 miles away. The Poor Clare Monastery has a total of forty-three nuns. It was established during the height of the “Difficult Times” (a.k.a.Vietnam War) by three Poor Clares who came from France. I can’t begin to imagine the courage it took for them to establish the monastery during that horrible time in history.

Our final stop of the day was at the Franciscan Seminary compound at Thu Duc. It is right across the street from the Poor Clare monastery and so it is easy for the nuns to keep a watchful eye on their Franciscan Brothers. We know that they are our constant prayer companions. The Thu Duc compound consists of both the Philosophy and Theology level programs as well as the two year Aspirancy program. The Province is blessed with close to one hundred Temporary and Solemn Professed students as well as fifty Aspirants. 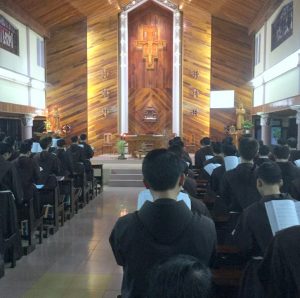 The old adage is true. . . “With age comes wisdom.” I have been blessed to be able to spend time in Vietnam for the past nine years and I have been the graced recipient of a multitude of new friendships. Not only have I met a large number of Friars but I have also been blessed with connecting with Cloistered Dominican Nuns, Poor Clares, Franciscan Seculars, Aspirants, and lay people. I am ten thousand miles away from Albuquerque and yet I feel at home in Vietnam. We are all One Body . . . The Body of Christ.