The Journey to the Cross Begins Palm Sunday

When was the last time that your church was filled to capacity with young people who were present voluntarily to sing, pray, and to celebrate their Faith? I was privileged to attend the annual twilight Palm Sunday Youth Mass with our novices at the Cathedral Church in Da Lat on Saturday. The young people ranged in age from 18 or so to about 25. They gathered from the various Catholic churches in the area and they numbered 1000 plus! 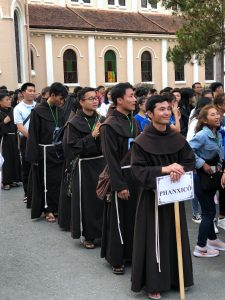 The Mass was scheduled to begin at 5:30 P.M. but the young people began to gather in the plaza outside the cathedral at around 4:00 P.M. A group of young Salesian Aspirants formed a welcome line and they cheered as each group of young people passed by. Yours truly got to lead our Brown Band of Brothers through the line as everyone cheered us on. The procession with palms started right on time and the Bishop led the enthusiastic youth into his Cathedral. I have to say that I have never been in such a large crowd of young people where I didn’t hear anyone’s cell phone ring or see someone texting. What a pleasant and 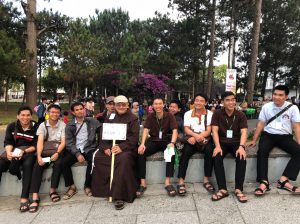 heartwarming surprise! After the Mass everyone proceeded to the auditorium where we enjoyed freshly made Banh Mi sandwiches and watched some creative performances by various youth groups. Palm Sunday itself found me with the novices back at the novitiate as we celebrated the Feast one more time.

It is encouraging to witness young people stand up for what they believe. In a country like Vietnam one can easily find oneself as a guest of the government for over-stepping boundaries of what is acceptable to talk about or to act on. The “March for Our Lives” movement in the United States is another heartwarming example of courage. The youth of today do have something to tell us about what is important in life. My default mode in these autumn years of life is to be the “armchair 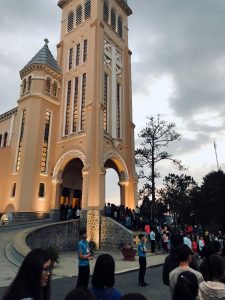 quarterback” who watches the world from a distance in his comfortable and safe lifestyle. Being a part of the Youth Mass inspires me to believe that our young people can and do have a powerful influence through their willingness to publicly express their beliefs. I have so much to learn.

Peace and All Good!