Laos, the Country Cousin of Vietnam

I arrived in Vientiane, Laos from Da Lat by way of Hanoi where I stayed overnight. My adventures started right after I checked into the small boutique hotel with a tall glass of iced coffee, two Laotian words, sabaidi (hello — pronounced like ‘somebody’) and khobchai (thanks — pronounced like ‘cope chay’), and lots of smiles and sign language. The next thing I know is that I’m sitting in the back of a three-wheeled motorbike taxi and I’m being driven through the streets of Capitol City. This country is like Vietnam on sleeping pills. Laos is to Vietnam what Vietnam is to China. The three countries are intricately connected by way of their political alignments — they are all communist controlled governments. There are less than nine million people in the whole country. Actually, more people live in Saigon than in the entire country of Laos. The street traffic is almost bearable and the roads are shared equally by motorbikes and cars, whose drivers seemingly respect each other’s space. Unlike in Vietnam, no one seems to be in much of a hurry and so one just goes with the flow. The country is at least 95% Buddhist and it is spotted with multiple brightly decorated temples throughout the city as well as in many of the villages. Buddhist monks are treated with great respect and are seen regularly in the streets of the city. 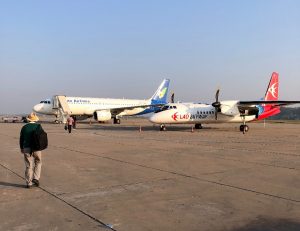 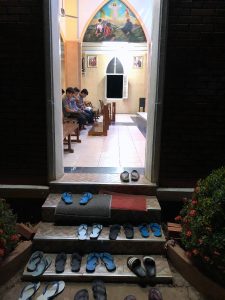 My second day in Laos found me sitting in a Lao Airlines 737 airliner (the company owns two 737s and two prop planes) en route to Pakse, Laos. There were no major delays and fifty minutes later we were there. Pakse is located in the southern part of the country, close to Vietnam. The famous Mekong River flows ever so gently through the city. This is where the Vietnamese Franciscans have established their mission. Currently they have three Friars assigned there. The one Friar priest has lived in Laos for seven years already and has become fairly fluent in the Lao language. The other two Friars are still learning so they have to rely heavily on smiles and sign language. Fortunately for them, the Lao people are extremely warm and welcoming as well as forgiving of any language faux pas.

I stayed at the diocesan seminary because the Franciscan friary is basically already filled to capacity with two Friars living and sharing a bedroom so that the four young men who are being groomed for the Franciscans can occupy the second bedroom. They live and pray with the Friars and go to school. In the future it is hoped that a Franciscan Formation Program will be initiated and these young men will be the first of hopefully many more vocations. The inserted community is located in one of the many poor neighborhoods that surround the city. The Friars and the students have a small garden in back of their friary and so they are able to enjoy the fruits of their labor for their community meals. 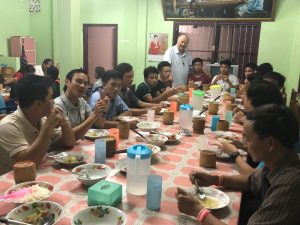 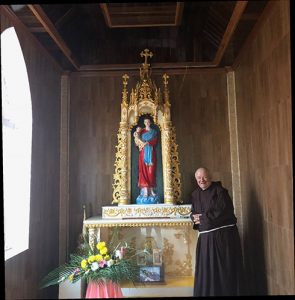 The Vicariate of Pakse has about 25,000 Catholics and seven diocesan priests. Six of the priests are active and they minister in a total of 47 mission churches. Our one Franciscan priest has the care of seven villages which he visits on a weekly basis. In truth it is only five because he has been restricted from two villages. The most-distant site is a 42-kilometer one way roller coaster ride on the motor bike. To call the route a true road is somewhat of a fairytale. It is more like a mountain trail. I am sure that Joseph ingests at least two cups of dirt each and every week when he travels there to celebrate the weekly Mass. He stays in the village overnight so that he can offer Mass at one of the other nearby villages. Because there is a lack of priests, the diocese has initiated an intensive catechetical training program for the lay leaders in the many villages. While I was at the seminary, about thirty men and women arrived from a remote ethnic village about 250 kilometers away in order to participate in a two week training program. These brave committed souls had to transfer three times to various buses that were passing by on their way from Vietnam to Pakse. The Lao buses would not stop to pick them up. Such is the life of God’s chosen.

I was privileged to be able to visit four of the villages while I was there. The Friars have a friend who volunteered to transport us in his four wheel drive Jeep. I think that every one of my fillings was involuntarily realigned during our trek! The people who live in these remote villages are members of one of the 60 ethnic tribes that live in Laos. They are a simple and loving people who farm coffee for a living. The old ones have been brought up in the traditional ways and so most are not able to read or write. Education is not readily available because transportation is not available. It is common for the girls to be married by their early teenage years. Medicine and doctors are also rare commodities and so healing is done through traditional folk cures. 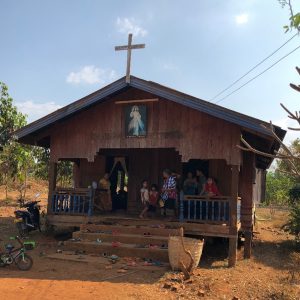 The work of the priests and religious also involves educating the villagers about personal hygiene and health practices. It takes a while for the villagers to trust outsiders who encourage them to make use of modern pharmaceuticals to cure common ailments that were formerly treated with herbs and home-brewed rice whiskey. The attitudes will change but it takes time. Prejudice and repression are difficult emotions to digest. It will be a while before I can adequately express all that I saw and heard while I was there. I think that it would be best if I defer my further thoughts to a later time when I am back in the USA. I was told by a local Laotian that “you can think whatever you want but just don’t say anything.” Perhaps I have already stepped outside of the box.