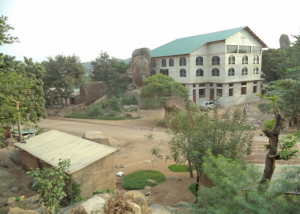 St. Bonaventure Catholic Church rises above the boulders and trees.

Just southeast of Lake Victoria and Mwanza, Tanzania, a beautiful, multistory structure stands surrounded by large boulders and marula trees. The new St. Bonaventure Catholic Church is in Mahina, a mission outstation of St. Francis of Assisi Parish in Butimba in the Archdiocese of Mwanza. The outstation was established in 1998, and over 1,400 Catholics live in the vast surrounding area. The Order of Friars Minor (Franciscans) and the Sisters of St. Francis of Penance and Christian Charity serve the Catholics of the Mahina mission station.

For 12 years, Mahina’s Catholics gathered for the celebration of the Eucharist in a small, wooden structure near the current church site or in other locations. The people began to ask for a permanent church. In 2010, the parish pastoral council decided to build a large, central church to accommodate the increasing number of Catholics living in and around Mahina. Parishioners contributed to Sunday collections for the project. Construction of the church began in 2014, with many local parishioners sharing the work. They cleared the land and prepared the foundation site for the multilevel structure. 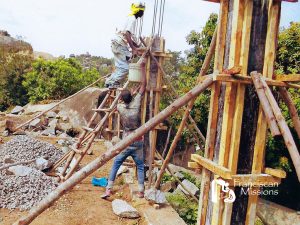 Workers pour the concrete into forms for the support pillars 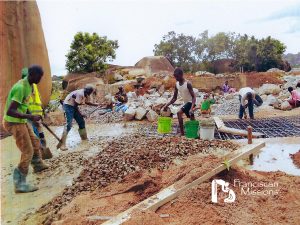 As the work progressed, the people realized that they could not raise enough funds to complete the project, and construction stopped. In 2016, the Minister Provincial of the Franciscan Province of East Africa, Madagascar and Mauritius Island sent a project proposal to request funding from the board of directors at Franciscan Missions in Waterford, Wisconsin. The proposal was approved, and generous benefactors donated funds for the church in Mahina, Tanzania.

Construction resumed in late 2017. Running water and electricity were installed at the site during the first phase of work in 2014. Plans for a two-story structure remained. The lower level supported the church above and provided space for meetings, classrooms for religious education, and a small chapel. To reduce costs, many materials were locally sourced, and concrete was made on site using limestone, granite, and sand from the area. 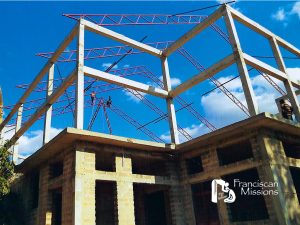 Looking up from ground level at the concrete supports and the roof trusses. 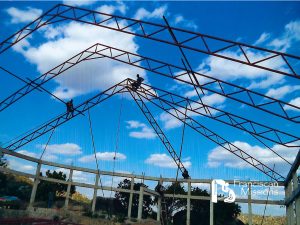 Building the church truly was a labor of love for the parishioners. They did much of the work by hand without heavy equipment. Large stones were crushed, bricks were carried, concrete was transported in buckets. A general contractor oversaw the project through each phase, and the parishioners invested their time and labor to move the project forward.

As the months passed, the church began to appear above the boulders and trees. Cement support pillars rose 20 feet high, and a constant procession of people carried bricks that were laid for the walls. Support girders for the roof were painted and raised into place. The roof was made of corrugated tin sheets.

Although final finishing work is still needed, the new St. Bonaventure Church was dedicated on March 25, 2018. Over a thousand people, young and old, joined in the celebration. The cooperation, unity, faith, and commitment of people near and far made the dream of a new church in Mahina a reality. 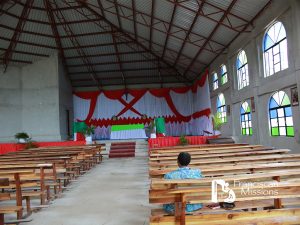 The interior of the church with benches ready for the dedication. 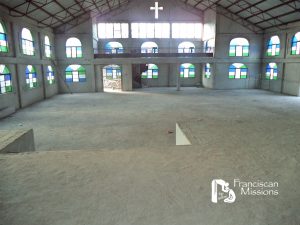 Interior view of the finished structure.