Claudette and her brother J.R. are surviving. She is 9 years old, and he is 3. Their parents were shot and killed before their eyes as government soldiers forced the family out of its home. The orphaned children stay with their elderly, very poor grandma when they can.

Outside Saint Joseph the Protector Parish in Quezon City, Philippines, Father Percival Tayem, OFM saw Claudette carrying J.R. on her shoulders as she picked through trash. He watched them for a while and then asked her what she was doing. Claudette told him that she was looking for things to sell so she could buy some food for her brother.

The children pick through garbage thrown out by others every day to collect recyclables and anything of value. Claudette sells their found treasures in the afternoon to earn enough money to survive another day.

Each child looked malnourished, and little Claudette seemed to be carrying the weight of the world on her tiny shoulders.

Like too many other children growing up on the street in Quezon City, Claudette and J.R. struggle every day to get enough food to eat.

Fr. Percy was so moved by this chance encounter that he vowed to do something to help them and other children surviving on the street. He recruited volunteers from his parish and begged and scrounged up as much food as he could to help feed the little ones.

Fr. Percy and the volunteers began to feed street kids out of St. Joseph the Protector Parish. There were so many street kids in need that they were soon feeding 100 kids every day, including Claudette and J.R.! 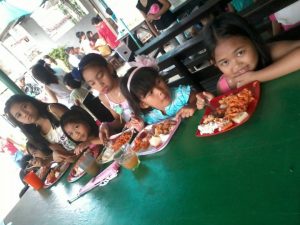 Many of these children are refugees living in extremely poor conditions or on the streets. Fr Percy’s feeding program offers hope every day.

I’m writing today to ask you to share some of the blessings in your life to help Fr. Percy feed the orphaned or abandoned children living on the streets. It only costs twenty-five cents to provide a meal for a child! Each meal consists of a banana, some rice, fish or chicken and vegetables.

If you are fortunate enough to sit down to a special dinner this Thanksgiving Day, you will be in a small minority of the world’s population. As a matter of fact, most people in the world never have a special dinner.

For millions of people in developing countries, even children, a small handful of rice is their only meal for an entire day!

A few coins—a little change from your pocket—can feed a hungry child!

Please send a donation today to help Fr. Percy and our other missionary friars provide food to all God’s hungry children in His world. Many children are refugees. Others live in poor or dangerous conditions. Some children are ill and suffering or are abused and forgotten.

Fr. Percy founded this meal program with parish volunteers and a shoestring budget, but now he needs your help, so all the hungry street children will continue to have a place to go. There are no special table settings—just nutritious bowls of rice, vegetables, protein and water on the table. 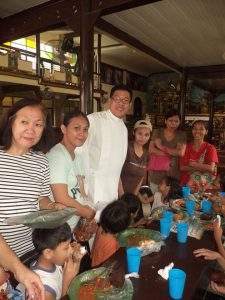 Fr. Percy and his staff of volunteers feed over 100 children everyday.

By sharing a little of the blessings God has bestowed upon you with the poor, you are providing food. Your change can truly change someone’s destiny from death to life.

The meaning of Thanksgiving is to give to those in desperate need with thanks to God for His blessings in your life. May your Thanksgiving be forever blessed.

You may never meet these children whose lives you touch every day through your generosity and prayers. But I assure you, they know the goodness of your heart, and so does our loving God.

Thank you for being a source of love, prayers and support in the lives of these children.

P.S. Your gift in thanksgiving for the blessings God has provided you will ensure that hungry children at the missions can rely on a complete meal every day. Thank you in advance for renewing your generous support of the work of our missionary friars.