Francis grew up detesting the sight of people with leprosy.

He, like others, went out of his way to avoid them. But, one day while riding his horse in the countryside, Francis saw a man with leprosy. As always, he attempted to look the other way. However, a sudden change of heart caused Francis to dismount his horse, approach the leper, put coins in his hand and kiss him.

After this conversion, Francis of Assisi lived with people who had leprosy. He fed them, washed them, wiped and bandaged their sores with gentle hands.

What changed Francis’ heart? Who did Francis encounter on the side of that country road? Francis saw Jesus.

Jesus transforms the world by changing the way people treat each other. Francis modeled that changed behavior for the rest of his life. Francis saw Jesus in everyone, so how could he treat anyone differently than he would Jesus?

If we treat others as Francis did, we, too, can change the world. As we do to others, we do also to Jesus. Franciscan missionaries today continue changing the world by treating the sick and the dying as Saint Francis did. They continue to see Jesus in the poor and afflicted.

Unfortunately, leprosy is still prevalent in many developing countries of the world. Guinea Bissau, in West Africa, is one of those countries. Franciscans were sent there fifty years ago to minister to people with leprosy. 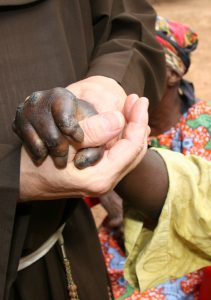 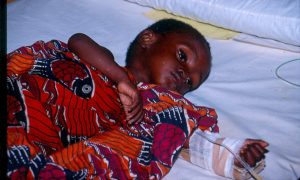 A young child being treated for malaria.

Guinea Bissau is one of the poorest countries in our world. Our Franciscan hospital in Cumura treats patients afflicted with dreadful, life-threatening diseases. Leprosy, AIDS, malaria and tuberculosis are common.

This year the hospital has been overwhelmed by the number of patients who have arrived seeking emergency care. The hospital treats about 50 new patients every day! Many people have walked for miles on jungle trails to get to our hospital.

The high demand has placed a severe strain on the hospital lab. The lab processes many tests per day to help with diagnosis, and the antiquated lab equipment can barely keep up.

The friars hope to build a new lab with modern equipment. A timely and accurate diagnosis with access to a safe, sterile environment ensures treatment is started as soon as possible to save lives.

Although there is now a cure for leprosy, early diagnosis and treatment are imperative. If untreated, leprosy progresses to cause permanent damage to the skin, nerves, limbs, and eyes. Because the body’s defenses are compromised, secondary infections can result in the loss of fingers, toes, legs and arms. 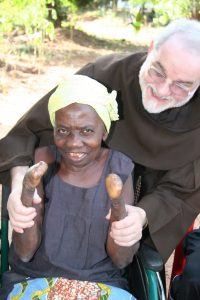 I ask you to open your heart once again to support our missionary friars working in our hospital in Cumura. They work all day treating people with life-threatening and dangerous diseases because they see Jesus in each one of them.

They pray every day for good and generous friends like you who support their work. It costs about $600,000 a year to operate the Cumura hospital. This includes the pharmacy, caring for the lepers during and after treatment, caring for children, and feeding all the patients and their families.

I pray you will understand the urgency of our current situation. Can you offer today your prayers and financial support to our missionary friars who serve those suffering from life-threatening diseases at the missions?

Please help as best you can. Any gift would make a difference!

Just like St. Francis of Assisi, serving the poorest and most helpless is a top priority for Franciscans today. When St. Francis personally fed hungry lepers and washed and bandaged their sores, he saw Jesus in each of them.

P.S. October is the month that we pay special tribute to St. Francis of Assisi. We will have a novena of Masses honoring him. Please send us your intentions so we can remember the needs closest to your heart.