Do You Ever Think About Walls?

You and I have been blessed with warmth and safe shelter behind walls.

Walls in the Old Testament meant life itself. Walls sheltered God’s people from the bitter elements and from warring enemies and death.

But in modern warfare today, walls are easily shattered. 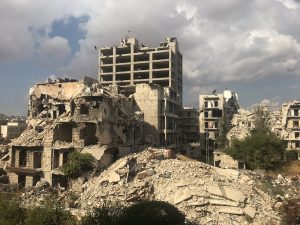 After years of intense bombing and fighting, the Syrian city of Aleppo is nearly quiet. The rebels who were in control of the eastern part of the city have abandoned their positions.

Many civilians, mostly women, children and the elderly, could not afford to escape the fighting. They lived through this tragedy in one of the most ancient cities of the world, which is now a heap of rubble. Families count their dead and their injured and mutilated. Many are homeless.

In the Christian quarter, Mrs. Mayada lives on a street that divided the government forces from the zone controlled by the rebels and Al-Nusra. She pointed at the remains of other balconies next to her apartment and said, “The bombs in those days fell like hail, and there, right there, the ISIS snipers were hiding.”

After the rebels abandoned their positions, the fighting ended in Aleppo. The survivors began to talk about reconstruction and rebirth. But the local government does not have the means to provide any substantial aid for the survivors. The local economy has been shattered, and there is little work.

The message of hope has never been needed more than now for these sisters and brothers. You can bring them hope. You can help them rebuild!

We need your help today! I am not exaggerating when I say walls will make the difference between life and death for the children and elderly who survived the war. 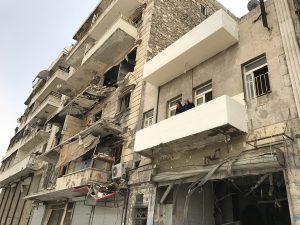 Mrs. Mayada views her damaged neighborhood from her repaired home.

Father Ibrahim Al-Sabbagh, OFM and our Franciscan missionaries in Aleppo are repairing damaged homes for families with no place to live or sleep. The homes being repaired have had significant damage, but do not need to be completely rebuilt.

On average, it only costs about $3,000 to repair a bomb-damaged home. The need is great because there are so many displaced families.

Fr. Ibrahim and the friars have received over 900 requests to help repair homes. They only had the resources to repair 90.

There is good news! A friend of the missions believes so strongly in helping the victims of this war that she offered to match YOUR generosity dollar for dollar up to $50,000!

Think about this. Pray about this one need. We can accomplish so much together! If only you will give generously today and have your gift DOUBLED.

Mrs. Mayada’s home was one of the first restored. Her repaired apartment is a stroke of God’s mercy in the middle of destruction and despair. But there are so many others waiting for help.

We can do this together! It is not an unattainable sum of money needed to repair 33 homes for 33 families.

On their behalf, I’m praying and striving to raise $50,000 that will be matched by another $50,000 so 33 new homes can be repaired. We can do this “if only” you will help. Any gift you send would be a blessing, and any gift you send will be doubled!

Please send a merciful gift today to repair a home for a family left homeless by this tragic war. Your generosity reflects God’s mercy. Be the stranger who helps rebuild walls!

P.S. Please help the people of Aleppo, Syria, find hope as they struggle to survive in the ruin and rubble of war. Help them renew their faith in eternal life for loved ones they have lost. We need each other in times like this. Please pray for them. Know that you are in the prayers of all our Franciscan missionaries each day.