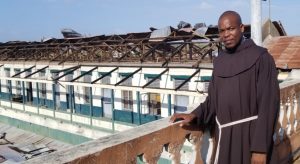 In the coastal city of Beira, home to about 530,000 people, ninety percent of the infrastructure has been blown or washed away.

On Thursday, March 14, 2019, Cyclone Idai struck the fourth largest city of Mozambique. The category two storm devastated the city with 105 m.p.h. winds and a thirteen-foot tidal surge. Water smashed into buildings and flooded homes. The people are traumatized and helpless. Their lives are shattered, and their homes and possessions are just piles of debris, broken wood and mud.

One hundred thousand people have been displaced. Many people are still missing, and one thousand bodies have been recovered from the mud and debris. Unlike most children who are attending school around the world, the school children of the Franciscan Cathedral School of Beira have no school to attend. The roof of their school was literally blown away, and a ten-foot tidal surge flooded the remainder of the structur

You can bring the children hope. You can help the Franciscans rebuild their school!

Our Franciscan missionaries from the Custody of St. Clare of Assisi in Mozambique have plans to rebuild this all-important school, but do not have the resources to do so. The school was built after decades of civil war in the country. Families living in farming communities outside the urban areas fled to the cities for protection during the war. Many of these immigrant families were poor and could not afford to send their children to school. This Cathedral School of Beira was built so these immigrant children could receive an education!

Father Bernardo Amaral, OFM, the Custodian of St. Clare of Assisi, has sent out an urgent request to the worldwide Franciscan Order for support to rebuild the Cathedral School of Beira.

Could you offer a special gift to help  Fr. Bernardo and our Franciscan missionaries rebuild this school, so these 1,200 children can get back to their studies? In the aftermath of the storm, over one thousand cases of cholera have been reported and violent crime is surging. This school is so important for these poor children. The school must be rebuilt as soon as possible so the kids have a chance to get an education and break the cycle of poverty!

The Our Lady of the Rosary Friary and the Franciscan church also had extensive roof damage and suffered from the same tidal surge. But rebuilding the school for the children is the top priority of the friars!

Your generosity is the image of God’s mercy and reflects the hope and peace of Christ to the poor!

God bless and reward you for the great charity and kindness of your heart.