Let Your Heart Lead You 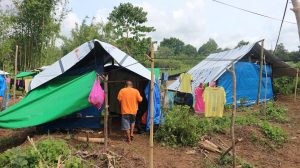 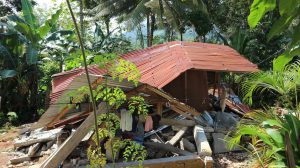 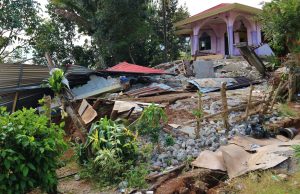 So read the makeshift sign hanging from a post outside a tent city for earthquake refugees on the island of Mindanao in the Philippines. As moving as that image was, far worse were the images of children crying amid the rubble of their homes toppled by the earthquakes that have plagued the southern Philippines since October 2019. A flurry of earthquakes with magnitudes ranging from 6.3 to 6.9 have struck Mindanao since mid-October. Many people have died, including a six-year-old girl crushed by a collapsing wall. Countless homes were destroyed, and thousands of families are homeless. People have fled their homes and villages because the risk of landslides is so great.

They are now living in temporary, tent-like structures. For the last three months, they have faced extreme temperatures, heavy rains, limited food and water, and illnesses resulting from overcrowding and compromised living conditions. Surely the Lord’s heart breaks to see such human suffering. Our hearts break, too. We may feel helpless against such natural disasters.

And yet, we are not helpless

The Franciscan missionary friars of the Custody of St. Anthony of Padua in the southern Philippines are already there giving aid. Father Neil Badillo, OFM wrote to his Franciscan brothers around the world the day after the first earthquake. He appealed for our swift and sustained support. Our friars are ministering to families and children impacted by the earthquakes and providing food, shelter, medical support. Brother Dennis Tayo, OFM and seven young student friars leave the friary before the sun rises to make the three-hour drive from Davao City to Kidawapan City to help the refugees every day. There are so many refugees living in temporary housing that relief efforts seem overwhelming at times. In one week, our friars have provided services to over 1,000 families by giving medical assistance to 857 individuals, including 302 children. During that week, they also distributed over a 1,000 food packs consisting of rice, canned goods, maize and noodles. Hundreds of blankets, tarps, sanitary kits and family-size mosquito nets were provided to the refugees.

Those were the efforts in just one week, and the Franciscan friars have been working with the refugees for weeks on end. Do you see why your support is so urgently needed now? I am inviting you to join us in sending desperately needed relief funds for the victims of this natural disaster. Will you please join with Fr. Neil and our other missionary friars to ease the suffering, provide shelter and start to rebuild lives?

God bless you for caring so deeply for children and families suffering in our time.

Your brother in Christ and St. Francis,

P.S. Please be as generous today as your heart leads you and your resources allow. Your every gift reflects your compassion for the poor in the missions.